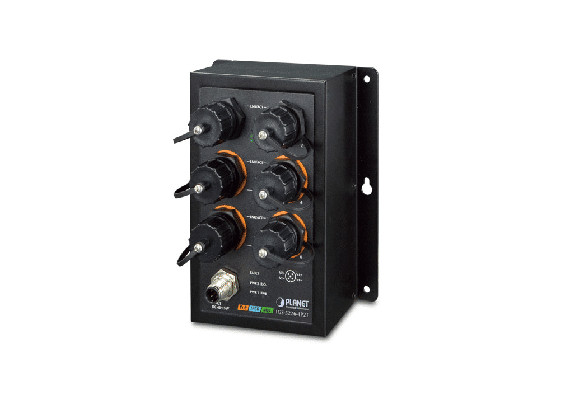 PLANET IGS-5226-4P2T, an Industrial Layer 2+ Managed Ethernet Switch, comes with an IP50-rated industrial case, 4-port 10/100/1000T 802.3at PoE, 2-port 10/100/1000T, and static Layer 3 routing, providing a high level of immunity against electromagnetic interference and heavy electrical surges which are usually found on plant floors or in curb-side traffic control cabinets. The IGS-5226-4P2T can be easily mounted on a DIN rail or wall taking up less space. Each of the four Gigabit PoE+ ports provides 36 watts of power, which means a total power budget of up to 144 watts can be utilized simultaneously without considering the different types of PoE applications being employed. It also provides a quick, safe and cost-effective Power over Ethernet network solution to IP security surveillance for small businesses and enterprises. 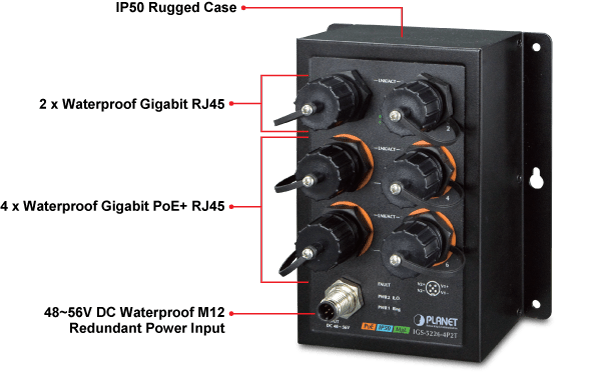 The IGS-5226-4P2T is equipped with a 6-port 10/100/1000BASE-T auto-negotiation dustproof RJ45 connector with 4-port IEEE 802.3at PoE+ (Port 3 to Port 6); each PoE port provides 36-watt PoE output. These shielded RJ45 plugs can make the general UTP cable dustproof. When connected to the dustproof RJ45 connector, it provides tight and strong connection, and ensures it comes with the industrial protection rating of IP50 capable of withstanding humidity, dirt, dust, shock, vibrations, heat and cold.

The IGS-5226-4P2T is able to protect itself from dust ingress, and to operate under the temperature range from -40 to 75 degrees C. All these features ensure the highest level of reliability for mission-critical applications in any difficult environment.

The IGS-5226-4P2T features a strong dual power input system (Dual 48V~56V DC) incorporated into customer’s automation network to enhance system reliability and uptime. For example, when DC Power 1 fails to work, the hardware failover function will be activated automatically to keep powering the IGS-5226-4P2T via DC Power 2 alternatively without any loss of operation.

To fulfill the needs of higher power required PoE network applications with Gigabit speed transmission, the IGS-5226-4P2T features high-performance Gigabit IEEE 802.3at PoE+ (up to 36 watts) on all ports. It perfectly meets the power requirements of PoE VoIP phone, PoE Wireless AP and all kinds of PoE IP cameras such as IR, PTZ, speed dome cameras and even box type IP cameras with a built-in fan and heater for high power consumption. The IGS-5226-4P2T’s PoE capabilities also help to reduce deployment costs for network devices as a result of freeing from restrictions of power outlet locations. Power and data switching are integrated into one unit, delivered over a single cable and managed centrally. It thus eliminates cost for additional AC wiring and reduces installation time.

The IGS-5226-4P2T can be configured to monitor a connected PD (Powered Device) status in real time via ping action. Once the PD stops working and it is without response, the IGS-5226-4P2T will resume the PoE port power and bring the PD back to work. It will greatly enhance the network reliability through the PoE port resetting the PD’s power source, thus reducing administrator management burden. 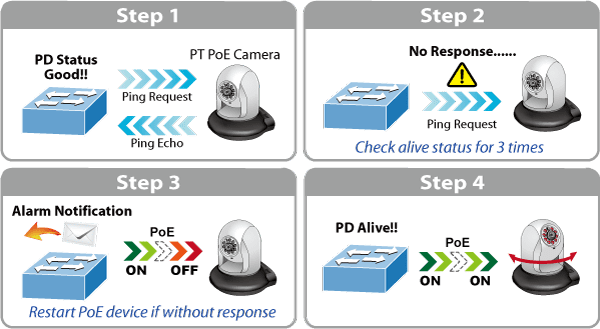 The IGS-5226-4P2T allows each of the connected PDs to reboot at a specified time each week. Therefore, it will reduce the chance of PD crash resulting from buffer overflow.

Though most NVR or camera management software offers SMTP email alert function, the IGS-5226-4P2T further provides event alert function to help to diagnose the abnormal device owing to whether or not there is a break of the network connection, loss of PoE power or the rebooting response by the PD Alive Check process. 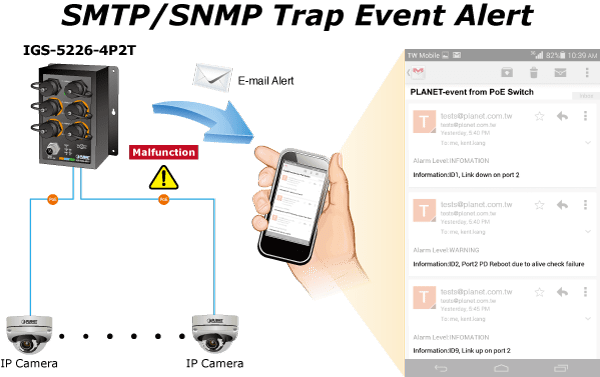 Besides being used for IP surveillance, the IGS-5226-4P2T is certainly applicable to build any PoE network including VoIP and wireless LAN. Under the trend of energy saving worldwide and contributing to the environmental protection on the Earth, the IGS-5226-4P2T can effectively control the power supply besides its capability of giving high watts power. The “PoE schedule” function helps you to enable or disable PoE power feeding for each PoE port during specified time intervals and it is a powerful function to help SMBs and enterprises save energy and budget. 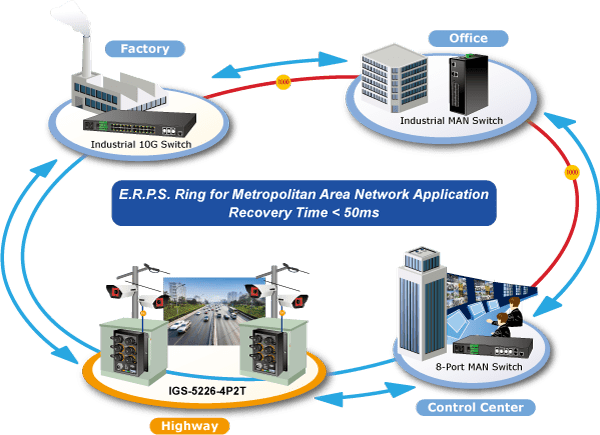 Supporting both IPv6 and IPv4 protocols, the IGS-5226-4P2T helps data centers, campuses, telecoms, and more to experience the IPv6 era with the lowest investment as its network facilities need not be replaced or overhauled if the IPv6 FTTx edge network is set up.

The IGS-5226-4P2T not only provides ultra high transmission performance, and excellent Layer 2 and Layer 4 technologies, but also layer 3 IPv4/IPv6 VLAN routing feature which allows to crossover different VLANs and different IP addresses for the purpose of having a highly-secure, flexibly-managed and simple networking application.

The IGS-5226-4P2T can be programmed for advanced switch management functions such as dynamic port link aggregation, Q-in-Q VLAN, private VLAN, Multiple Spanning Tree Protocol (MSTP), Layer 2 to Layer 4 QoS, bandwidth control and IGMP/MLD Snooping. Via the link aggregation of supporting ports, the IGS-5226-4P2T allows the operation of a high-speed trunk to combine with multiple fiber ports and supports fail-over as well.

The IGS-5226-4P2T offers a comprehensive Layer 2 to Layer 4 Access Control List (ACL) for enforcing security to the edge. It can be used to restrict network access by denying packets based on source and destination IP address, TCP/UDP ports or defined typical network applications. Its protection mechanism also comprises 802.1X Port-based and MAC-based user, and device authentication. With the private VLAN function, communication between edge ports can be prevented to ensure user privacy. The IGS-5226-4P2T also provides DHCP Snooping, IP Source Guard and Dynamic ARP Inspection functions to prevent IP snooping from attack and discard ARP packets with invalid MAC address. The network administrators can now construct highly-secure corporate networks with considerably less time and effort than before.

The IGS-5226-4P2T is loaded with powerful traffic management and QoS features to enhance connection services by telecoms and ISPs. The QoS features include wire-speed Layer 4 traffic classifiers and bandwidth limit that are particularly useful for multi-tenant units, multi-business units, Telco and network service providers’ applications. It also empowers the industrial environment to take full advantage of the limited network resources and guarantees the best performance in VoIP and video conferencing transmission.

With built-in Web-based management interface, the IGS-5226-4P2T L2+ Managed Switch offers an easy-to-use, platform-independent management and configuration facility which includes Web and SNMP management interfaces. The SNMP can be managed via any management software based on the standard of SNMP Protocol. For reducing product learning time, it offers Cisco-like command via Telnet and customer does not need to learn new console command. Moreover, it also offers secure remote management by supporting SSH, SSL and SNMP v3 connections which encrypt the packet content at each session.5 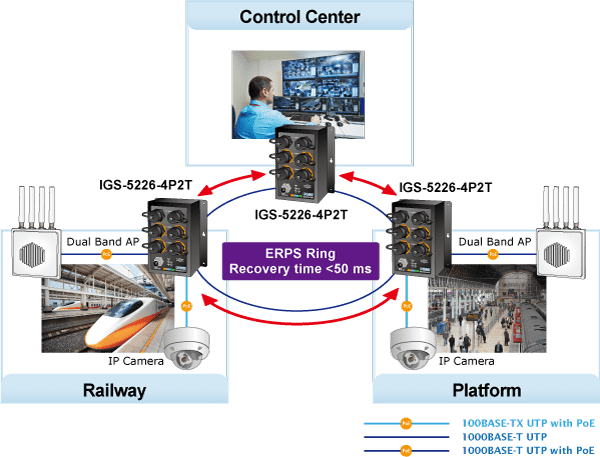 Layer 3 VLAN Routing and PoE Application
With the built-in, robust Layer 3 routing protocols, the IGS-5226-4P2T ensures reliable routing between VLANs and network segments. The routing protocols can be applied by VLAN interface with up to 32 routing entries. The IGS-5226-4P2T, certainly an ideal solution for industries, offers greater security, control and bandwidth conservation, and high-speed uplink. 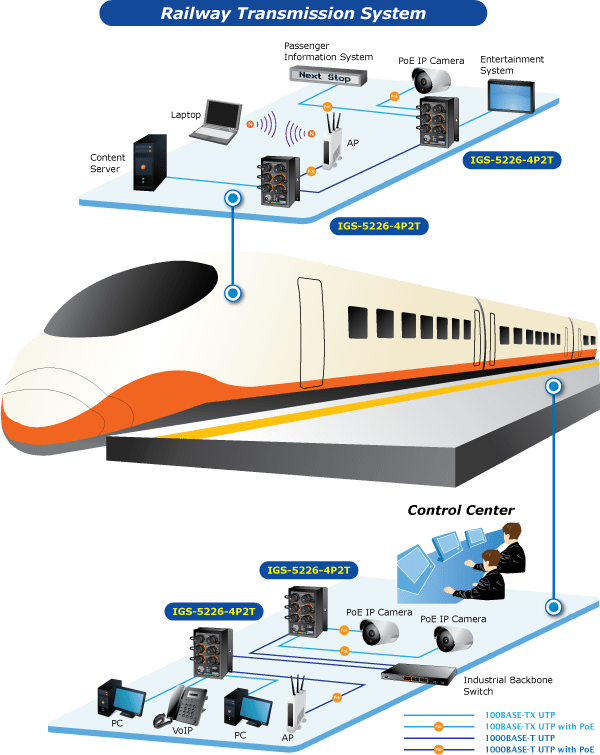