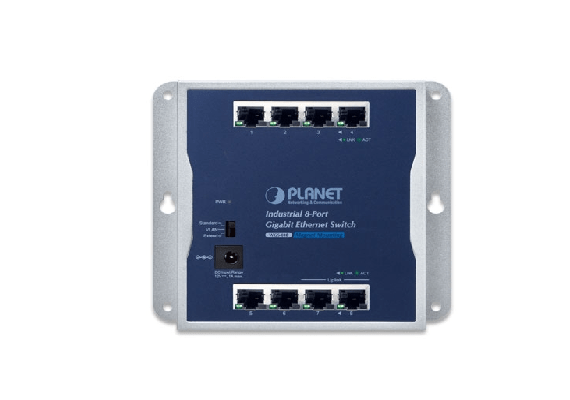 Designed to be installed in a wall enclosure or simply mounted at any convenient location on a wall, PLANET WGS-810 is an innovative, wall-mounted industrial 8-port Gigabit Ethernet Switch. It comes in a compact but rugged IP30 metal housing. Featuring ultra networking speed and operating temperature ranging from -20 to 60 degrees C, the WGS-810 is an ideal solution to meeting the demand for the following network applications.

Building / Home automation network
Internet of things (IoT)
IP surveillance and wireless
The WGS-810 is able to operate reliably, stably and quietly in any environment without affecting its performance, and provides a quick, safe and easy deployment of home automation network. 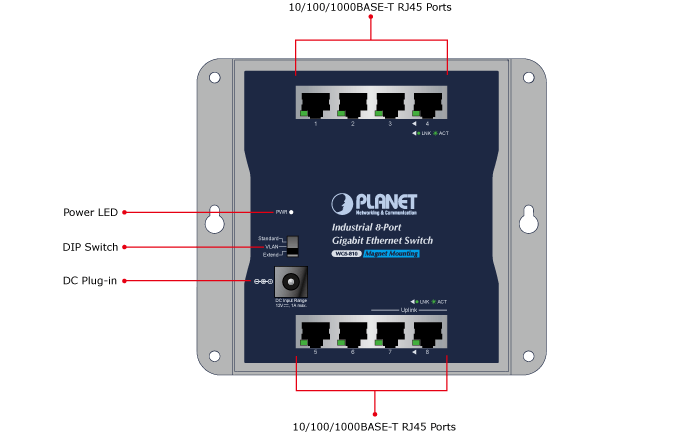 The WGS-810 is specially designed to be installed in a narrow environment, such as wall enclosure. The compact, flat and wall-mounted design fits easily in any space-limited location. It adopts the user-friendly “Front Access” design, making the installing, cable wiring, LED monitoring and maintenance of the WGS-810 placed in an enclosure very convenient for technicians. The WGS-810 can be installed by fixed wall mounting, magnetic wall mounting or DIN-rail mounting, thereby making its usability more flexible. 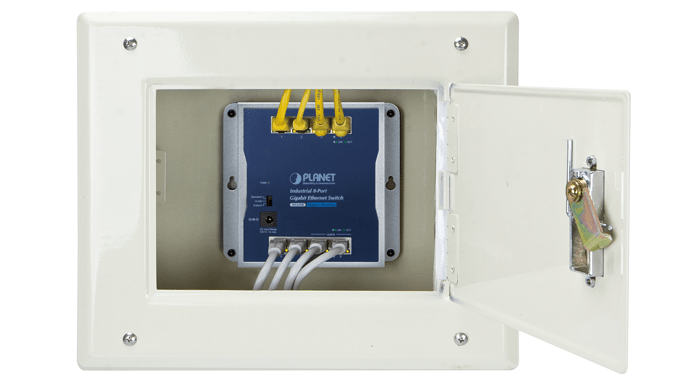 The VLAN operation mode features the port-based VLAN function that can help to prevent the multicast or broadcast storm from influencing each other. With two uplink ports with 1000Mbps transfer rate, it ensures high-speed data and video transmission, and reliable assurance for connection between server farm and end users.

In the Extend operation mode, the WGS-810 operate on a per-port basis at 10Mbps duplex operation but over a distance of up to 250 meters overcoming the 100m limit on Ethernet UTP cable. It also supports VLAN isolation to isolate ports so as to prevent broadcast storm and defend DHCP spoofing in the extend operation mode.

All of the RJ45 copper interfaces in the WGS-810 support 10/100/1000Mbps auto negotiation for optimal speed detection through RJ45 Category 6, 5 or 5e cables. The standard auto-MDI/MDI-X support can detect the type of connection to any Ethernet device without requiring special straight-through or crossover cables.

Ready to Go with IoT Generation

Internet is very popular the world over as users surf online daily with their mobile devices, such as smart phones, tablets, or laptop computers. However, users expect more from the convenience of Internet, like how to use their mobile devices to control something via the Internet, thus making life more convenient. The WGS-810 is based on such concept to help users implement the Internet of things (IoT) on the SOHO/Home network. Home automation is no longer a dream as Gigabit network can easily cloud IoT equipment, making it a smart home.

Industrial Area Switch for Data Collection and Forwarding
The WGS-810 is equipped with 8 10/100/1000Mbps ports that offer auto MDI / MDIX feature, 16Gbps non-blocking switch fabric and the 4K MAC address table so that wire-speed packets can be transferred safely. The Gigabit ports supporting 9K jumbo packet can handle large amounts of data transmission in a secure topology linking to a backbone switch or high-power servers. The WGS-810 with the slim type IP30 metal case is ideal for most heavy industrial demanding environments. 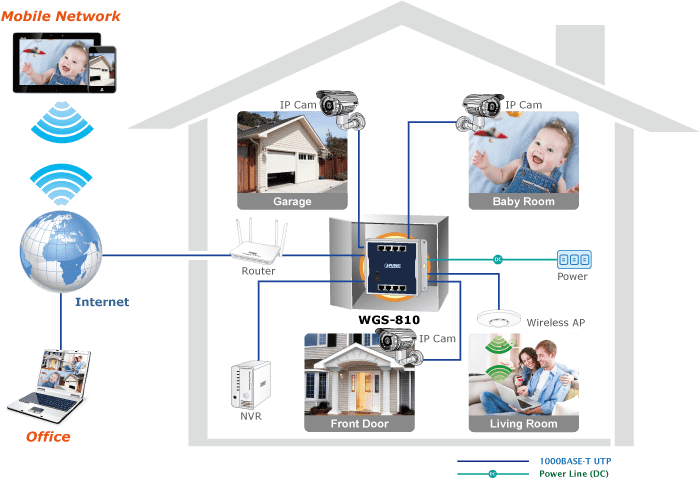